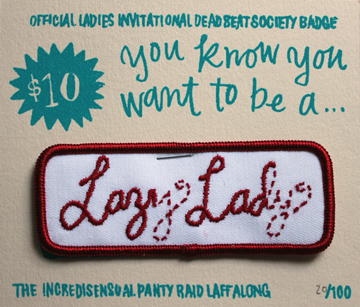 The Ladies’ Invitational Deadbeat Society (LIDS) was founded in 2006 as a closely-knit affiliation of then-unemployed cultural workers, not working, but still bustin’ ass within Alberta artist-run culture. Their activities made visible and politicized women’s roles in the arts economy through tactical laziness, crafty collaboration, over-performance, and wild hilarity. They announced their intentions to DO LESS in a series of works produced between 2012 and 2014, and to completely withdraw from art-making at the Calgary Biennial 2015. After a decade of non-activity, they officially called in quits in 2016. LIDS was Anthea Black, Nicole Burisch, and Wednesday Lupypciw.

An archive of projects can be found on the LIDS site.