The Ladies’ Invitational Deadbeat Society’s limited edition DO LESS WITH LESS / DO MORE WITH MORE cross stitch pattern poster was first printed at the Alberta Printmakers’ Society in June 2012. The slogan was inspired by a discussion held during Artivistic’s Promiscuous Infrastructures project at Centre des arts actuels Skol in Montréal, Québec about how artists and non-profit arts organizations negotiate the constant pressure to do more with less. Reissued for FUSE Magazine‘s last issue, LIDS proposes that we resist the capitalist logic of constant acceleration, productivity, and austerity budgets by reasserting a realistic level of production within our means. Use LIDS’ handy pull out pattern to stitch a banner for your own office and hang in the orientation of your choice!

A version of the poster was also printed in PHONEBOOK 4, directory of independent art spaces, programs, and projects in the United States, in 2015; and it has been included in exhibitions Beginning with the Seventies: Glut, at the Morris and Helen Belkin Art Gallery, Vancouver, BC in 2018 and Creative Cloth: Aesthetics and Apparel at Museum London, London, ON  in 2019. 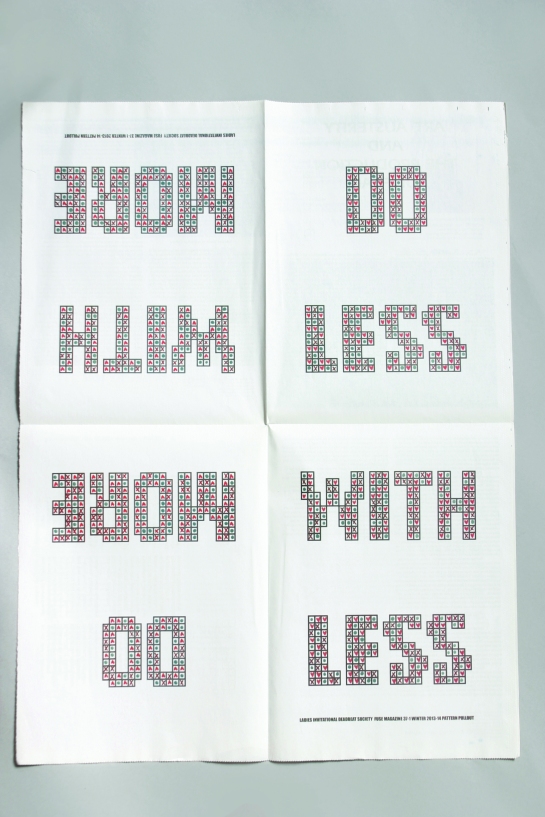